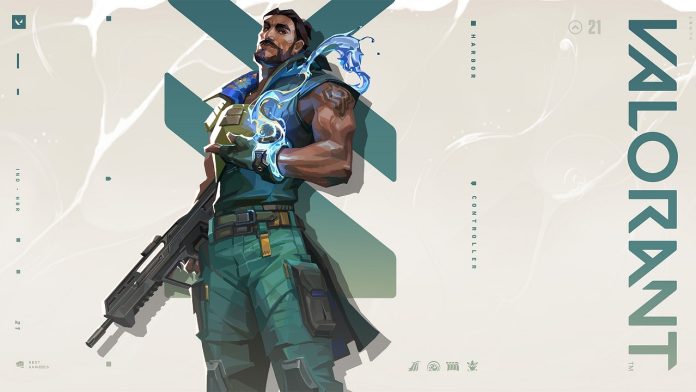 The Abilities, Equipment, and Tips Explained in the Valorant Harbor Guide

With the release of the newest season, a great deal of fresh new content has been added to Valorant. The most significant of these alterations has got to be the introduction of Harbor, the newest agent working for Valorant.

The water-based skills of Harbor are causing quite a stir in the Valorant community, and players are putting in a lot of effort to figure out how and when they may be used most effectively.

Players are able to figure out where Harbor functions the best thanks to Valorant’s own classification system, which directs them in the appropriate route.

Let’s go over all of Harbor’s abilities and some helpful hints and suggestions on how to use them in Valorant so you can get the most out of the game.

The Explanation of Harbor’s Capabilities in Valorant

The first of Harbor’s four abilities consists of him sending forth a horizontal wave of water that will pass through any walls it encounters as it travels away from you.

If you want to stop the wave in its tracks before it reaches its maximum range and stops on its own, you can reactivate this ability at any time to do so. The wave will continue to exist for a total of five seconds after it finally stops moving.

A thirty percent slowdown will be applied to the movement speed of any foes that are affected by the wave while they are in contact with it and for a few seconds after they have left it.

This is an excellent tool for preventing players from swiftly swinging through and picking off your squad. It also blocks a line of sight, which is another important function.

The most significant issue that smokes provide is the possibility for players to pass through them unimpeded so long as they are able to respond quickly enough.

Any players who were able to push through the wave will emerge later and at a slower pace, making them an easier target for your side to eliminate while the adversary is trying to adjust their focus to what they are seeing.

You might even combine the sending out of the wave with a push from your squad in order to grab enemy while they are out of cover and prevent them from swiftly getting back into their positions.

The ability may be purchased for 150 credits, but you can only have one active at any given moment.

It is possible for Harbor to launch a sphere of protective water. The sphere moves just like any other object that is thrown and will bounce off of walls as it does so.

When it finally makes contact with the earth, it will go off. When it strikes the ground, a ball of water will emerge from the ground beneath it in a fraction of a second.

This sphere, which is comparable in size to a smoke sphere, obstructs eyesight in addition to protecting against gunshots. In the same way as with previous smokes, you can see well inside the sphere but not outside of it.

On the other hand, this water sphere will prevent any shots from penetrating it, regardless of whether they come from inside or outside of it. It is impossible to break the sphere before its full duration of 15 seconds has passed after it has been created.

The best strategy for dealing with this issue is to employ Harbor’s Q as a sightline blocker for popular peak locations.

It fulfills the function of a standard smoke on Valorant, but it also has the additional bonus of preventing foes from spamming through it, which is something they would normally do if they had access to a smoke.

Remember that your team won’t be able to do anything with the sightline that you throw the sphere in, so keep that in mind. Of course, this is something that you should keep in mind.

You must also keep in mind that you are unable to terminate the ability before its intended use. After you have sent it out, the dome will remain up for a total of fifteen seconds regardless of what happens.

The ability will set you back 350 credits, and you will only be able to have one active at any given moment.

Make use of this talent to launch a wave of water forward. Once the ability has been fired, you can continue to hold down the fire button to direct the wall of water in the direction of your choosing after it has been fired.

The wall is able to penetrate other walls and will continue to fly in the direction that you point it for around two seconds. After you have positioned the wall where you want it to go, the wall itself will form and remain in that position for a period of twelve seconds.

It will prevent any vision from being seen, yet it may be fired through and passed through. A 30% slowdown in movement speed will be imposed to whoever walks through the wall, and this effect will last for a few seconds.

Because it is Harbor’s signature ability, this will be the primary ability that you will want to utilize against him.

You can put this to use whenever you wish to obstruct a number of sightlines that are somewhat close together or even surround an entire sight for the benefit of your team.

You have a sufficient amount of time to guide the wall, and it is more than sufficient time to form a complete half-circle.

Even while the wall can be shot through like any other visual blocker, the fact that it applies the delay effect means that adversaries will try to avoid crossing it if at all feasible.

Because this ability has a cooldown and can be used multiple times in retake scenarios, you will want to use it first whenever it is practicable to do so.

After you begin to launch High Tide, it will have a cooldown of 40 seconds, and you will only be able to hold one charge of it at a time.

Send a geyser erupting out of the ground in the area in front of Harbor. The circle penetrates whatever walls it encounters, but it cannot be directed in any way.

As soon as the circle has been established, it will begin to mark and concuss any foes that are present in the region at regular intervals. The effect of the concussive force lasts about two seconds, and the marking effect is a massive column of light that appears in the sky.

This effect will continue to be applied at regular intervals for a total of nine seconds, which is a defined interval every few seconds.

The most effective method for cleaning up a site is to use Harbor’s Ultimate. Be it for offensive side takes or defending side retakes.

When you throw this down, it will force adversaries out of their hiding places and signal to your squad where they should seek for them.

Even if the ability misses its target entirely, it will still cover a significant portion of the location, and it will let your teammates know where they do not need to check. In order to use Harbor’s Ultimate, you will need to have a total of seven ultimate points.

The Playstyle that Harbor Employs in Valorant

Because Valorant gives classifications to each and every one of its agents, we already have a pretty solid concept of how the game of Harbor should be played.

Given that we are aware of his role as a player who supports the team, it is unlikely that he will be the first on any site. However, he does have a lot of potential to take over a field and make it his own.

Once your team has secured a location, you have the ability to effectively lock it down and force the adversaries to maneuver around you.

When utilizing the majority of Harbor’s talents, you will need to do so with a lot of forethought. You not only have the capacity to obstruct the sightlines of the opposing team, but you also have the ability to block the sightlines of your own team.

After being activated, none of Harbor’s abilities can be canceled under any circumstances.If you are more interested in the lore of the world of Valorant, you should check out our lore guide on Harbor. You can find it here.

If the game is giving you a hard time overall, there are many different instructions for Valorant that you may read at on our website.

Valorant is available for PC.