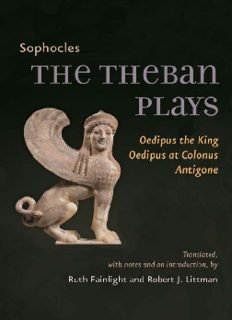 Sophocles, who lived between the years 496 and 406 BC, was motivated to write a dramatic trilogy on the battle of men against destiny by the myths surrounding Thebes’ royal house.

King Oedipus relates a story about a man who brings disease to Thebes as punishment for crimes he is unaware he has committed and then inflicts a severe penalty upon himself.

It is a heartbreaking portrait of a tyrant brought down by his oath and contains significant insights into the human condition.

Antigone depicts the fall of the next generation through the conflict between a young woman who is ruled by her conscience and a king who is too confident in his authority.

A brilliant introduction that explores the key ideas of the plays, the role of the Chorus, and the customs and staging of Greek tragedy is included with E. F. Watling’s translation.

Over more than seventy years, Penguin has maintained its position as the preeminent publisher of canonical literature in the global English-speaking market. With more than 1,700 volumes, Penguin Classics is a global bookshelf of the most important and influential works from all periods, literary traditions, academic fields, and other categories.

Readers have faith that the series will give authoritative texts that have been augmented by introductions and comments written by renowned academics and modern authors, in addition to translations that have been brought up to date by translators who have won awards.