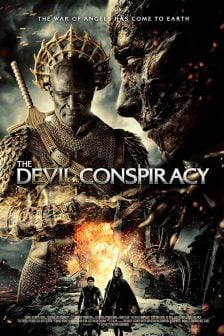 The official trailer for The Devil Conspiracy, a forthcoming science fiction action adventure horror film, has been released by Samuel Goldwyn Films. The film is slated to be released in theaters on January 13, 2023. The video provides a preview of the supernatural battle that will take place between Archangel Michael and Lucifer. In the video, adherents of the king of hell steal Jesus’ DNA from a sacred artifact to create their anti-Christ.

According to a statement released by Peter Goldwyn, “We are pleased to offer The Devil Conspiracy to filmgoers next year. We have every reason to believe moviegoers will like this riveting and dramatic picture of the war between heaven and hell.

Nathan Frankowski is in charge of directing The Devil Conspiracy, while Ed Alan was the one who wrote the screenplay. Alice Orr-Ewing from “The Theory of Everything,” Joe Doyle from “Salem,” Eveline Hall from “Summertime Blues,” Peter Mensah from “The Incredible Hulk,” Joe Anderson from “Across the Universe,” Brian Caspe from “Jojo Rabbit,” and James Faulkner all appear in it (Atomic Blonde).

Below is the official trailer for The Devil Conspiracy, which you can see now:

“A formidable biotechnology business has developed ground-breaking technology that enables them to clone some of the most important persons in human history using only a few DNA strands. According to the summary, “Behind this company is a cabal of Satanists that takes the shroud of Christ, placing them in possession of Jesus’ DNA.”

The clone will act as the pinnacle of sacrifice to be presented to the devil. Michael, the Archangel, descends to earth and vows to “stop at nothing to put an end to the devil’s plan.”

Kevan Van Thompson, Vaclav Mottl, Michael Emerson, and Mike Sears serve as executive producers for The Devil Conspiracy. Ed Alan is also involved in the production of the show in the producer capacity.

The Banshees of Inisherin (Latest Movie, Released Date, and Trailer)