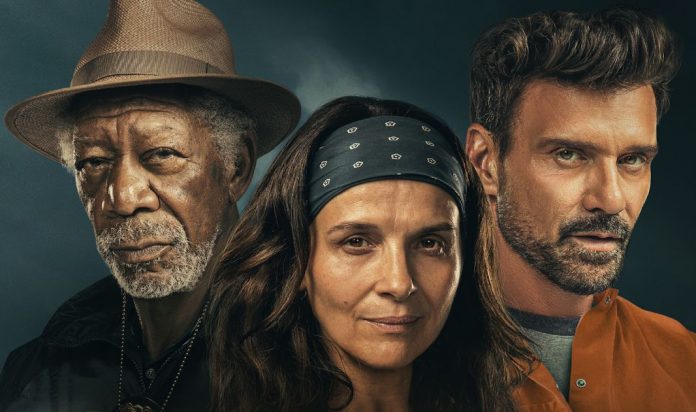 Sally (Juliette Binoche), who had a difficult childhood due to the presence of an abusive parent, could lean on no one but her brother, Dennis (Frank Grillo).

After many years have passed, Dennis is currently incarcerated and has become dependent on Sally, who is a truck driver. When Dennis warns Sally that she must transport illegal merchandise or he will be hurt, she is determined to fulfill her obligation, even after she discovers that the “gift” she is supposed to deliver is a girl named Leila. Sally’s determination to fulfill her obligation is unshakeable (Hala Finley).

The story of “Paradise Highway,” which was written by Anna Gutto (“A Light Above”) and directed by her, follows Sally and Leila as they flee from both the good-hearted FBI agents, who are portrayed in the film by Morgan Freeman and Cameron Monaghan, and the sex traffickers who are looking to recover Leila. They have nothing but a shotgun and a radio with which Sally can communicate with a group of other female truck drivers to keep them company. Their comradery, as well as Finley’s performance as the disturbed Leila, are two of the film’s shining points; yet, the movie as a whole never fully finds its footing.

Her lingering French accent also looks out of place in that society, which may not come as much of a surprise given that Binoche’s performance as a working-class American truck driver is not credible. In addition, the hypothetical risk to her brother is hard to take seriously as a sufficient reason for her to take part in such a horrific crime, and it is difficult to believe that she would do so.

Although it is heartening to see officers of law enforcement concentrating their efforts on the recovery and support of a victim rather than the pursuit of her abusers, this does not allow for very much narrative suspense. If only the movie had taken a broader look, providing more information on the lives and reasons behind the sex traffickers as well as the truck drivers, it may have been a far better movie.