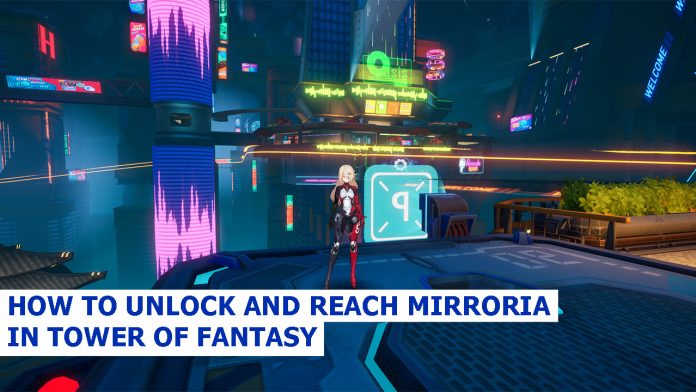 As a result of the huge territory of Vera’s introduction into the worldwide version of Tower of Fantasy, players from all over the world now have the opportunity to investigate the region’s deserts as well as its futuristic city.

But how exactly do you get to Mirroria once you’re inside the Tower of Fantasy?

Now that we’ve gotten everything out of the way, let’s go through how to go into the cyberpunk city of Mirroria in Tower of Fantasy so you may explore what many players believe to be the best part of the game as soon as you possibly can.

You will be able to access the city of Mirroria when you have unlocked the ability to travel to Vera by completing the Land of Sand main questline in that region.

When you arrive in the city, you will almost instantly be able to make rapid transit to any of its districts by making use of the city’s railways and aerial taxis.

As a result of this, although you will not be able to enter some of the establishments featured across the city right away, you will be able to interact with the Gachapon machines that are dispersed across the districts.

These machines have the potential to reward players with Matrix sets, cosmetics, gacha currencies, vehicles, and exclusive items.

In our tutorial titled Where to Get All the Mirroria Gachapon Machines in Tower of Fantasy, you will find information regarding the locations of all of the machines.

After you have initially entered the city, you will be able to freely return to the desert by utilizing the transport unit that is situated just in front of the primary structure. This will allow you to leave the city at any time.

You will also have the ability to teleport yourself directly to the city from anyplace else in the world by accessing the game’s map, selecting the Mirroria icon, and then selecting the Aerial Port Access transmission point. This will allow you to bypass the need to go through the air.

To quickly summarize, here is how to use the Tower of Fantasy’s fast travel system to get to Mirroria: