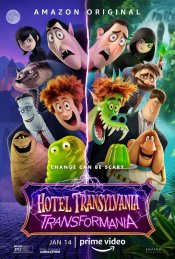 In Hotel Transylvania: Transformania, Dracula and his pack make a triumphant return, appearing in a form unlike any other. You’ll get to spend time with all your favorite monsters again in this brand-new adventure that features Drac facing his most horrific challenge. When the mysterious device known as the “Monsterfication Ray” that Van Helsing developed goes haywire, Drac and his monster friends are all changed into humans, and Johnny transforms into a monster! In their new, mismatched bodies, Drac, who has lost his powers, and Johnny, who is ecstatic about life as a monster, must work together to search the world for treatment before it is too late and before they drive each other insane. With the assistance of Mavis and the hysterically human Draconian Pack, the Dracs are under pressure to find a way to reverse their changes before their new forms become permanent.