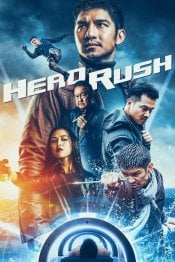 The idea of Head Rush is unabashedly ridiculous, which means it will immediately turn off audiences or keep folks fascinated for the long haul. Tam is currently hard at work on his most recent comic novel. He is, however, suffering from a life-limiting condition, and his remaining time on earth is estimated to be between two and four weeks.

He is upset and irritated and takes his frustration and anger out on his wife and child. It is a blessing that his uncle is an experimental surgeon because he is the only one who can save Tam by doing the procedure. After undergoing a head transplant, Tam now possesses superhuman skills. However, along with his newfound abilities comes a sinister secret.

Despite the absurd plot, a few action sequences are very nicely choreographed. This contains a passage near the story’s beginning in which Tam imagines himself as the hero he is writing about. Great camerawork consists of the fact that it can either be lightning rapid and smooth or chaotic and frenetic, depending on the circumstances. The action sequences in Head Rush can immerse viewers in action in a way that other types of action movies sometimes struggle to accomplish.

Given how ridiculous the plot is, this is an essential point. The insanity does not end when Tam’s body is placed on top of some super soldier. As the story progresses in Head Rush, there are more turns of events and revelations. It has the potential to become more complicated than a movie of its genre has any right to be. It has a certain allure because it is not afraid to embrace some of its more absurd concepts, but in most cases, it is more aggravating than anything else.

The movie never decides what kind of mood it wants to convey. There is comedic and dramatic intent, but everything is played so far over the top that it often gives the impression that none is supposed to be taken seriously at any point. This does not contribute to the shenanigans but makes Tam an intolerable main character. It is challenging to find common ground with him. Despite its many flaws, Head Rush is nevertheless a strangely entertaining game.