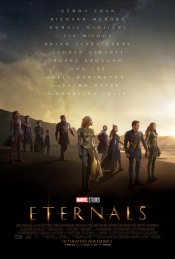 The heavenly creatures known as the Celestials conducted genetic experiments on humanity millions of years ago, which resulted in the creation of people with superpowers and near-immortality, as well as a more horrific offshoot known as the Deviants. This is where the Eternals got their start.

In addition to participating in power plays on a cosmic level, the two races have been involved in various behind-the-scenes maneuvers throughout human history. Ikaris, who derives her power from the cosmos, Sersi, who takes great pleasure in mingling with people, and Thena, who is frequently confused with the Greek goddess Athena, are all members of the Eternals.