Home Movies World Movie Trailers The Doom Patrol team faces the end of the world in the... 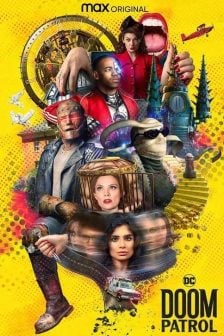 The long-awaited official trailer for the forthcoming fourth season of the critically acclaimed DC Comics superhero series Doom Patrol has finally been released by HBO Max. The series is due to come back on Thursday, December 8, with the first two episodes. The team’s next high-stakes assignment is highlighted in the teaser for the upcoming fourth season of Doom Patrol. This mission involves the team trying to discover a means to stop the end of the world. A revelation about the Immortus Project is also hinted at in this passage.

Watch the official trailer for the upcoming fourth season of Doom Patrol below:

The DC Comics superhero team known as the Doom Patrol was reimagined in the show Doom Patrol. The Doom Patrol is a collection of individuals with extraordinary abilities who battle for a world that wants nothing to do with them.

They function as both a support group and a superhero squad. Brendan Fraser, Matt Bomer, April Bowlby, Diane Guerrero, Joivan Wade, and Michelle Gomez are among the actors who star in this series.

The logline states that the beginning of Season 4 would begin with the team unintentionally journeying to the future, where they will encounter an unwanted surprise. “Faced with their impending demise, the Doom Patrol must make a decision once and for all on which is more important: their own happiness or the destiny of the planet.”

Jeremy Carver, the creator of Supernatural, is the man behind the writing and creation of the new show Doom Patrol, which is based on the DC Comics series developed by Arnold Drake, Bob Haney, and Bruno Premiani.

The show is produced by Greg Berlanti, Geoff Johns, Jeremy Carver, and Sarah Schechter in their capacities as executive producers. HBO Max currently offers streaming access to the first three seasons of the show.

The Lord of the Rings: The Rings of Power (Releasing Date & Trailer)