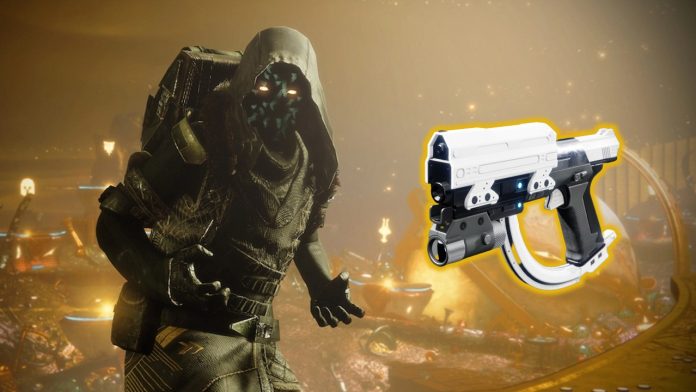 In Destiny 2, the Strange Key is an item that is required to acquire the Forerunner, an Exotic Sidearm that takes inspiration from Halo’s well-known M6D Magnum Pistol.

The player is not given a sufficient amount of information regarding the Strange Key, including what it is, where it may be discovered, and what it unlocks.

In this walkthrough, we will walk you through the process of acquiring the Strange Key, putting it to use, and ultimately getting your hands on the Forerunner itself.

In Destiny 2, what does the Strange Key allow you to unlock?

When players go to Xr’s Treasure Hoard in Eternity, they will receive the Strange Key from Xr. This key is necessary for completing the Magnus Opus quest, and Xr will give it to them as a reward.

Players will need to make use of the Strange Key toward the conclusion of the Magnus Opus quest in order to access a hidden Halo-themed section in the region known as Valley.

This area can only be accessed by traveling through the purple teleporter that is situated behind Xr.

Destiny 2: Your Guide to Acquiring the Strange Key

In order to gain the Strange Key in Destiny 2, you will first need to earn Rank 4 Reputation with Xr and then speak with him directly in Xr’s Treasure Hoard to receive it for free.

Although you are required to have accepted the Magnus Opus quest in order for the Strange Key to become available, there is no requirement that you be currently on a step that calls for its utilization.

READ ALSO:  How to know how long you've been playing the New World Game

Your standing with Xr can be improved by taking part in the Dares of Eternity and by successfully completing the bounties that he offers for sale.

In Destiny 2, you must first make sufficient progress on the Magnus Opus quest before you will be able to use the Strange Key.

Acquire seven Strange Coins by successfully completing the Dares of Eternity more than once. You should make it a point to collect bounties from Xr, as doing so will assist you with the mission later on.

Starhorse has given you three bounties to complete. The Starhorse, which is very literally a horse made of stars, can be discovered in Xr’s Treasure Hoard, just near to where Xr is located.

In contrast to Xr’s bounties, only one of Starhorse’s can be worked on at a time without interrupting the process. It is important that you continue to claim and finish Xr’s bounties because doing so will assist you in moving on to the next step.

Your reputation should have increased slightly as a result of the previous quest steps, but it is likely that you will need to complete a few more Dares of Eternity runs before you are able to buy the key.

After purchasing the Strange Key, proceed inside the purple cloud with a whirling motion that is located at the far back of Xr’s Treasure Hoard.

You need to make a beeline towards the cluster of rocks in the north-eastern corner of the area and keep an eye out for a strange-looking rectangle that protrudes from one of the rocks.

From this location, you should be able to use the Strange Key to access the hidden location, which will now be indicated on the map. Finding the right angle to use the key in the lock might be challenging at times.

After climbing to the very top of the structure, you will ultimately come upon a cryo pod, which, once more, Halo enthusiasts should be able to recognize immediately.

The Forerunner is a formidable handgun that draws a great deal of inspiration from the Magnum from the Halo franchise, which was initially developed by Bungie but subsequently passed on to 343 Industries so that Bungie could concentrate all of their efforts on Destiny.

READ ALSO:  The collab between Fortnite and Dragon Ball could be the game's most significant crossover.

In Halo: Combat Evolved, when you aim down sights with Forerunner, your reticle will change into one that is extremely similar to the one used by the Magnum.

In addition, there is a Masterwork that can be equipped to the gun, which gives the player the power to transform their regular grenades into fragmentation grenades.

If you found this guide to be helpful, you may also be interested in reading some of our other Destiny 2 guides, such as the one that explains when Season 19 will begin.

If you are also a lover of the Halo series, you will be pleased to know that we have an abundance of helpful tutorials for the Halo: Infinite video game.

It is now possible to play Destiny 2 on personal computers, PlayStation 4, PlayStation 5, Xbox One, Xbox Series X|S, and Google Stadia.

Destiny 2: Strange Key Use and Location

God of War: How to defeat Fiske: Ragnarok