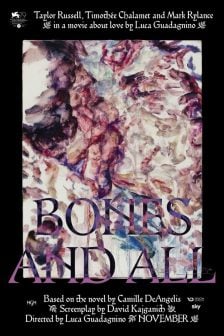 The next romantic horror thriller directed by Luca Guadagnino, Bones and All, will debut in theaters on November 23. MGM has just released a red band trailer from the film.

The three-minute clip focuses on the character of Maren, played by Taylor Russell, as she secretly departs to attend a sleepover with her close pals. However, the evening does not end on a positive note because Maren cannot control her cannibalistic inclinations, which results in the revelation of her sinister secret.

Bones and All Trailer

According to the plot summary, “The film will center around a story of first love between Maren (Russell), a young woman learning how to survive on the margins of society, and Lee (Chalamet), an intense and disenfranchised drifter, as they meet and join together for a thousand-mile odyssey that takes them through the back roads, hidden passages, and trap doors of Ronald Reagan’s America.”

Mark Rylance, Michael Stuhlbarg, Chloe Sevigny, Francesca Scorsese, Jessica Harper, André Holland, and David Gordon Green, who directed Halloween, are among the actors who have been added to the cast.

Luca Guadagnino is the man behind the camera and the producer of Bones and All. Dave Kajganich developed the screenplay for the film. Giovanni Corrado and Raffaella Viscardi are the ones in charge of the show’s executive producer.

Frenesy Film Company and Per Capita Productions are responsible for producing this project. The film is being funded by some Italian production companies, including The Apartment Pictures, Enzio Ricci’s 3 Marys, Memo, Tender Stories, Adler, Elafood, Elafilm, Manila, Serfis, and Wise Pictures.