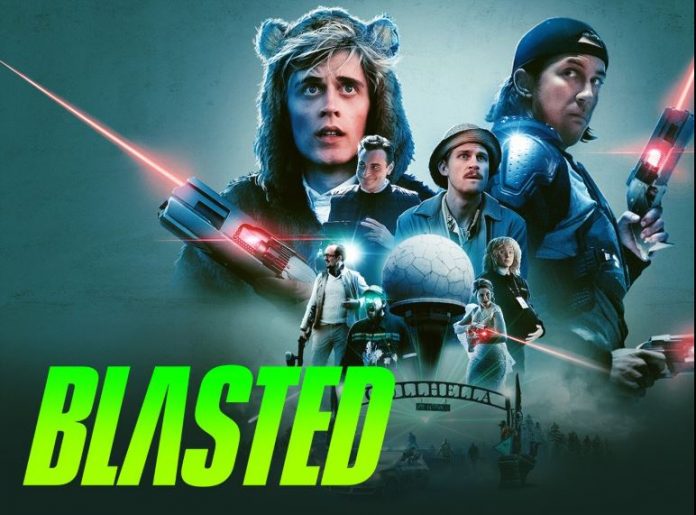 In Blasted, longtime pals Sebastian (Axel Bayum) and Mikkel (Fredrik Skogsrud) get together for Sebastian’s bachelor party and find themselves back in the same situation they were in as kids. Sebastian, on the other hand, has developed into a career-obsessed workaholic and is using the party to schmooze a possible customer. Mikkel, on the other hand, has never grown up beyond being a teenage laser tag prodigy. But when the bachelor party accidentally runs into an extraterrestrial invasion, it’s up to Mikkel and Sebastian to get back together as the badass lasertag combo they used to be and put up a fight. 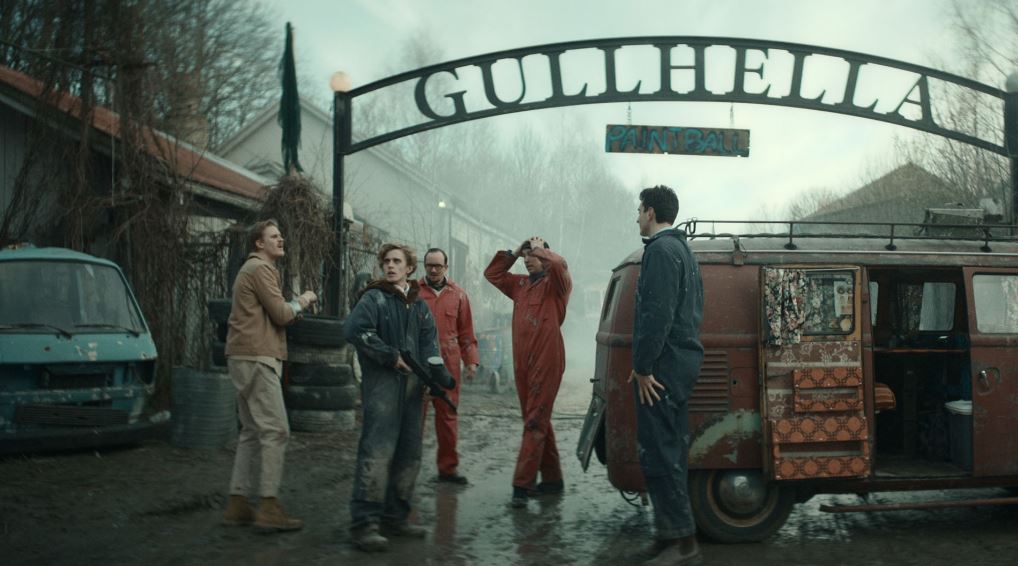 A REVIEW TO GUIDE YOU THROUGH

Blasted is a form of comedic sci-fi action drama hailing from Norway and featuring a dash of humor throughout its running time. The movie makes an attempt at portraying the story of an alien attack during a bachelor party with psychedelic irreverence; this is an idea that is glibly sold through the poster punchline, which reads: Bros Before UFOs. If it weren’t for the actual event that this movie is based on, the plot of this comedy thriller might sound like something you’ve seen before. It would be a combination of a buddy comedy with the tension of an extraterrestrial invasion. The Hessdalen lights, which are unexplained multicolored streaks seen over Norway’s Hessdalen valley, served as motivation for the creation of the fictional narrative. It is a phenomenon that has not been adequately explained and that has frequently been brought to light by unsubstantiated reports of UFO encounters. The plot of Blasted is established by utilizing the alien mythology that is associated with the lights.

Foreign-origin films, which rely on aesthetics and commercial logic beyond what is typically peddled by Hollywood, require a specific relish in order to be enjoyed, and major Scandinavian entertainers are generally no different from the usual in this regard. You start viewing the movie while having that in mind the entire time. Both the writer Emanuel Nordrum and the director Martin Sofiedal have worked hard to develop a plot that is suitable for the more general OTT audience found around the world. The picture, which is said to be the first Norwegian fantasy comedy based on a sci-fi premise, combines intermittent comedy with aspects of moderate violence and respectable horror to create a basic narrative that is geared toward audiences aged 16 and older. 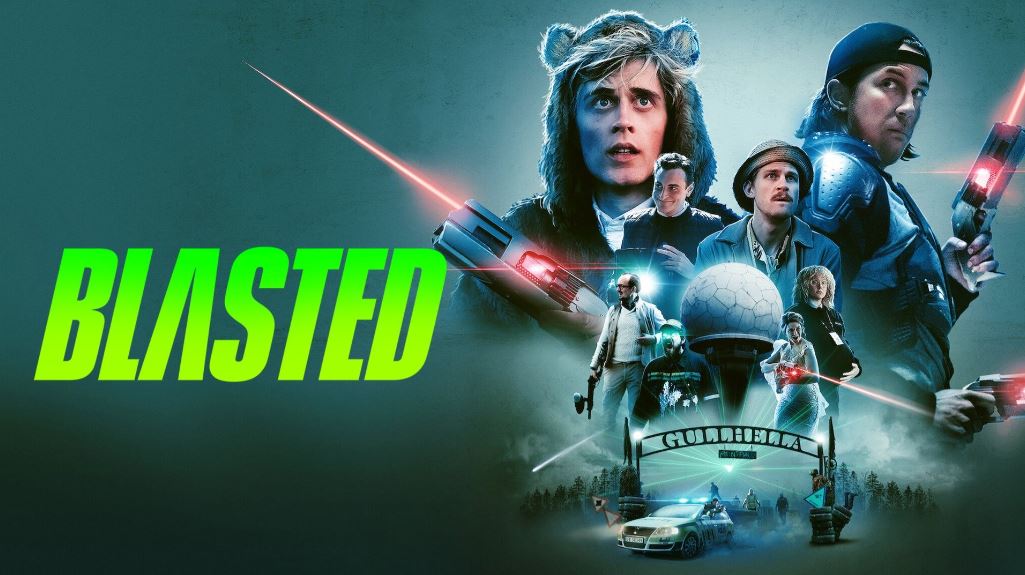 In spite of the fact that it is based on such an uncommon idea as the Hessdalen lights, the narrative that Nordrum wrote relies more on situational thrills than it does on attempting to produce anything completely original. The story centers on two protagonists who are ill-suited to one another; they were best friends growing up but have taken quite different paths in life. The story attempts to create a backdrop that is larger than life. Sebastian and Mikkel are Axel Boyum and Fredrik Skogsrud, respectively, in their roles on the show. When Mikkel unexpectedly shows up at Sebastian’s bachelor celebration, which is being held at Hessdalen, the old pals get the chance to see each other again. While Sebastian has evolved over the years into a career-focused, successful professional, Mikkel has never quite reached the level of maturity that Sebastian has reached. When they were younger, the two of them were part of a laser tag team that won multiple championships. Because Sebastian’s purpose is true to lure a wealthy investor to a project, the fact that Mikkel was there at Sebastian’s party is one of the reasons he was initially irritated by his presence.

The film begins on a note that is both expected and unsurprising when it presents its element of the odd. The celebration gets underway, and everything runs smoothly for a while, but then they are suddenly ambushed by aliens. For a generation that has been raised on a diet of superheroes, and especially if you are still rejoicing over the jaw-dropping opening sequence of the most recent blockbuster starring Doctor Strange, the kind of outlandish plot Kickstarter that was just described won’t exactly throw you for a loop anymore. On the other hand, Mikkel and Sebastian aren’t exactly superheroes. It doesn’t take long for Mikkel to come to the conclusion that he and Sebastian’s former skills as a laser tag team are their best chance of fending off the alien assault.

If you cross The Hangover with Aliens in the Attic and Lazer Team, you end up with a mainstream product like this one. However, if you were looking for a comedy with the same amount of amusing slapstick as The Hangover or the same amount of geeky action as Lazer Team, then it may not be the best advertisement for the picture. The issue is not only with the content but also with the way it is being directed. The movie falls back on cliches in an attempt to merge bachelor party shenanigans with sci-fi brutality, but the result is that there is not a single scene that is memorable enough to take away with you. Neither of the two components is presented in a way that inspires conviction. The alien entities in the movie engage in the practice of body snatching and transform their human captives into creatures resembling zombies that emit green light from their eyes. If the “villains” come across as tired caricatures, the climactic battle scene, in which Mikkel, Sebastian, and their pals struggle to save the world, is as monotonous as a boring video game. 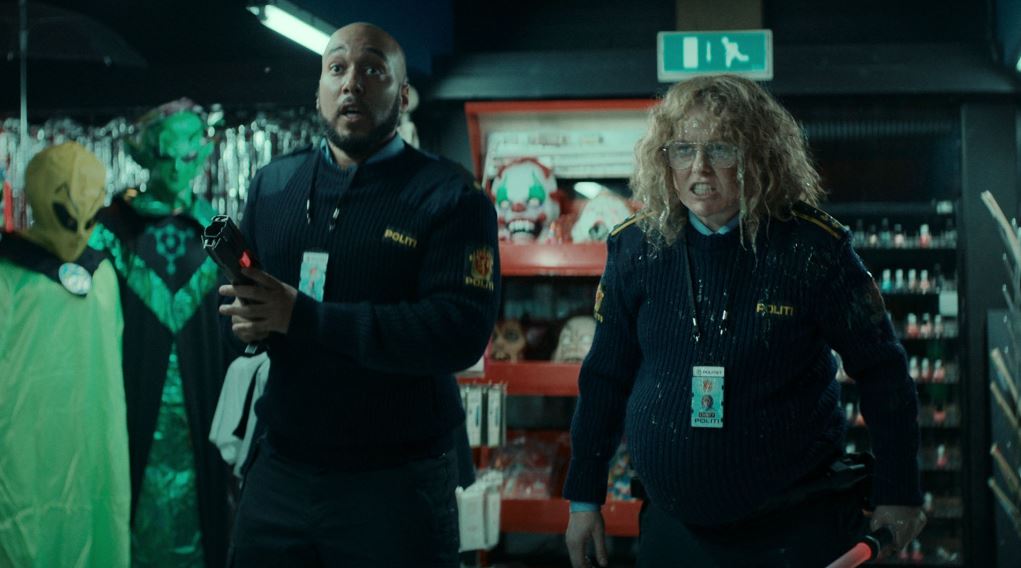 Think of movies like “Back to the Future,” “Bill & Ted’s Excellent Adventure,” or “Honey, I Shrunk the Kids” for examples of screenplays that successfully combined offbeat science with action and/or irreverent humor to create movies with enduring appeal. Blasted appears to be a long way from reaching that kind of success for the simple reason that, in a generic sense, the movie isn’t doing anything that hasn’t already been done for at least twenty years. The writing Nordrum makes an attempt to establish a fast-paced script, but the plot doesn’t really go anywhere. The movie feels too much like it was made on an assembly line overall.

This is not the type of movie that has room for interesting characters or performances, thus there won’t be any takeaways from watching it. Due to the nature of the narrative structure, the actors are required to participate in a number of intentionally ridiculous pranks during the course of the production. In their roles as Sebastian and Mikkel, Axel Boyum and Fredrik Skogsrud play out the necessary buddy tropes, and in general, the cast performances are overshadowed by the excessive use of CGI in the action sequences. This is a movie that really goes all out to establish its idiom of the absurd, but the parts don’t have enough background for the actors to be able to provide performances that are worth watching.

Blasted makes an attempt to be a crazy adventure, but it lacks the vital wacky inventiveness needed for the role. When it comes to the manner in which the story is told, being purposely stupid necessitates taking some chances. This is a fundamental principle of filmmaking that the writer Nordrum and the director Sofiedal appear to have ignored. If you are willing to suspend your disbelief throughout the entirety of the movie, along with your expectations and your rational faculties, then you might like the movie.

I Will Not Be Silent by Phil Thompson. (Download Mp3 Song)